bug_report Want to leave Feeback on this Article? Open an Issue or a PR.

This post is part one of a three-part series discussing how to integrate Jenkins, Tanzu Build Service, and ArgoCD.

One of the most significant issues with adopting Kubernetes is developing a workflow that allows for building production-ready container images. Images need to be built and frequently in a repeatable manner.

Tanzu Build Services (TBS) leverages something called a Buildpack to build containers. A Buildpack is a standard approach to ingesting application source code and converting it into a runnable container. Since Buildpacks are based on a standard implementation, multiple vendors can provide Buildpacks. VMware bundles an extended set of Buildpacks based on the Packeto open-source project.

Normally containers based on BuildPacks are built using a CLI command called pack. The pack tool scans source code the determine what type of BuildPacks to use and applies its configuration to a base operating system image.

Tanzu Build Service extends the cli by creating builds with a declarative manifest. Containers are rebased by TBS when newer BuildPacks are imported into the cluster.

As a software developer:

Given some source code, I just want to be able to run it on Kubernetes.

Given a Kubernetes application, I want any easy way to update the container to fix the latest CVEs.

The above diagram depicts the flow when a developer commits new code.

Argo Out of Sync 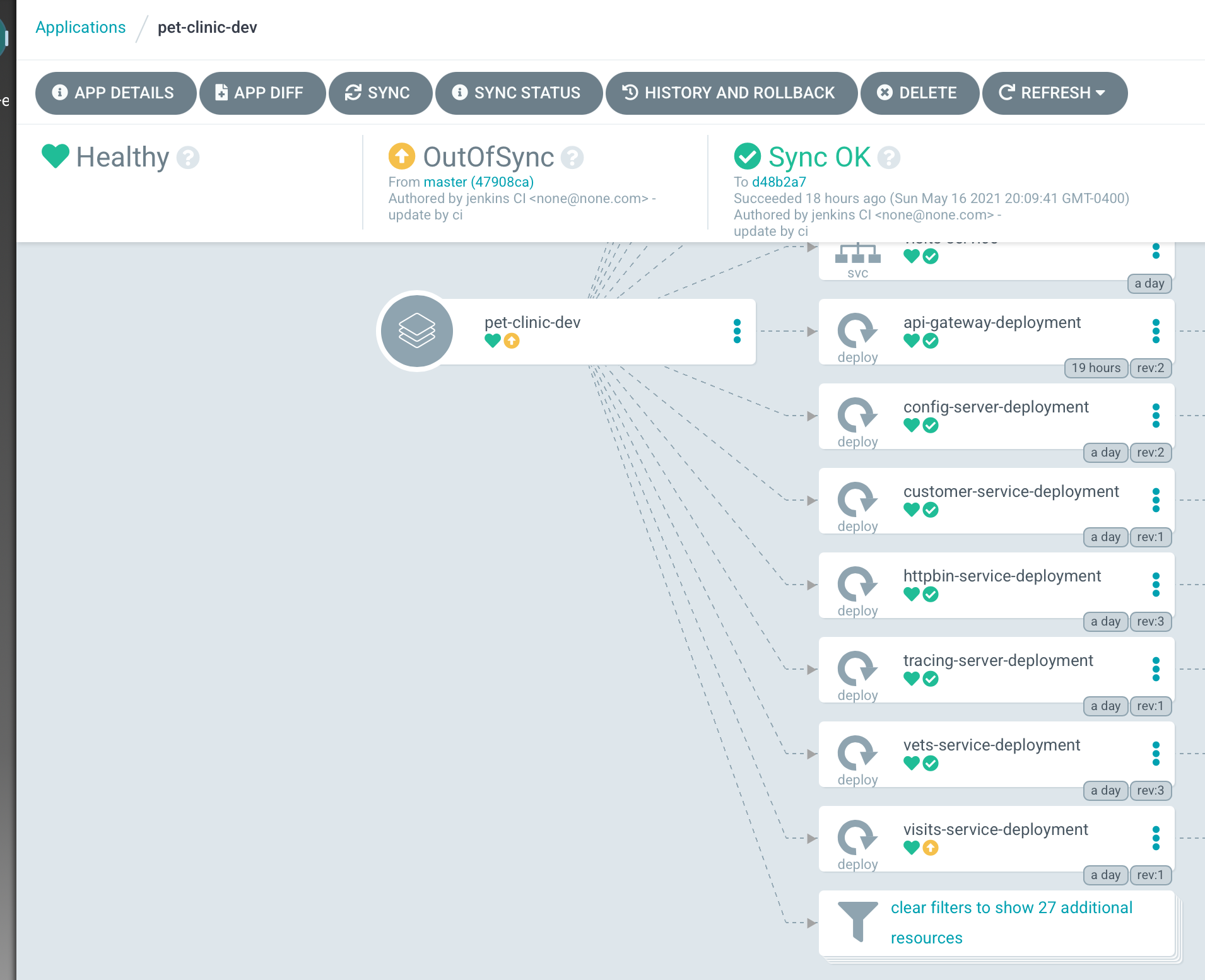 Any differences between the GIT Baseline and what is deployed by Argo are reconciled automatically. Logging in Argo will show when and why artifacts changed.

Although any continuous delivery tool could be used to implement this workflow, I chose Jenkins for its ubiquity. If you want to follow along and run my pipelines, you will want to make sure you have Jenkins configured to run builds inside Kubernetes containers.

The following plugins must be installed:

I have included the versions of the plugins I am using. The Jenkins plugin ecosystem is very volatile, so version numbers may vary for you over time.

In the Spirit of Configuration as Code, I have a groovy script that is used to seed jobs within Jenkins. Adding a new Job is as simple as adding a new entry to the script and committing the changes to GIT. In the code below, I have the name of the project and the name of the pipeline file that should be used to build the result. Since all my apps are Spring Boot, they all can use the same pipeline. A pipeline file is nothing more than a Groovy script that instructs Jenkins on executing a job.

The complete script is available here

All of these steps are performed in a clean docker container as defined in the pod template.

Since our pod needs access to a remote Kubernetes cluster, I have mounted a service account KUBECONFIG into the pod as a secret.

Since we use Kustomize to maintain our deployment versions. We update the kustomization.yaml using kustomize itself.

All of these steps run within the “k8s” container, which was pulled from Harbor.

This image is based on the following Dockerfile.

It’s a standard docker image with some utilities that we commonly need to use.

The complete script is available here

In the following article, I will include an example of how to automate promoting artifacts to a stage/prod environment using GitOps.

bug_report Want to leave Feeback on this Article? Open an Issue or a PR.